Adventurers of Renown: The Rogue Prince™ 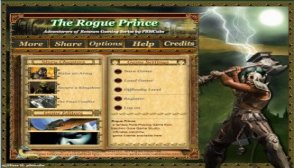 Purchase a multi-player license for your self-hosted Renown Game from Steve Gose Game Studios. The free "downloaded demo game" provides advertising revenues directly to our developers; but with an active License, these pre-game ads are turned off and allows up to 3 gamer-teams. You have two options available when licensing any Renown Game. Either license option permits:

You -- the Rogue Prince -- are in hiding. Your uncle -- the mage who usurped and killed your father, the King -- now sits on your father's throne. You must flee eastward, raise more gold by adventuring, and recruit a loyal army of not less than 10 companies and heroes, with which you will meet your uncle's forces in a battle to regain your rightful heritage. All this must happen before the coming "Great Conjunction of Stars" in 40 days; or forever loose the chance to recapture what is rightfully yours! The way will not be easy, for the folks of the Eastern Province are strange, and some are schooled in the darker mysterious arts as your uncle.

The valley passages are guarded by monsters, it is said; and in ruined cities lurk foul things never born of this earth. However, you have your stubborn Northland will and your Great Sword. So, woe be to anyone, or anything, that stands between you and your quest to regain your heritage.