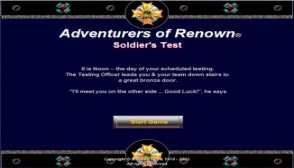 King Stefan is the ruler of a powerful kingdom in the southwestern lands known  as Treesahra. He is also renown as a strong warrior. His ruthlessness with his soldiers, and his generosity toward those who meet his standards are legendary.  Thus, hundreds of would-be adventurers seek out his realm … to face the Soldier’s Test.

You are one such adventurer who has found that the infrequent find of treasure does not keep one’s belly full. Entering Stefan’s Kingdom in Treesahra, you  quickly learn that the King is, as usual, hiring mercenary troops if they pass the  Soldiers’ Test. Alone or in small fellowships, they may enter a labyrinth under  any Town Hall as if searching for treasure. And in truth, treasure is in the  offering guarded by monsters, prisoners, mages and other soldier candidates. Test  candidates may keep whatever treasure they can carry out and are given enlistments  in the military ranks with status to equal they gallant performance during the  ‘test’. The final military rank is determined by how many originally entered the  labyrinth, their conduct in combat and the quantity of foes they slew during their  trek. The penalty for failing the test is death.

Join the military ranks of the Treesahran Army in this RPG fantasy game from PBM³. Adventurers of Renown Gaming System™ is a fantasy role-playing game of high adventure and legendary deeds. The Soldier’s Test™ (ARST) is an advanced game module of man-to-Hero combat. ‘The ‘Test’ provides your experienced characters the best place to earn a steady income as enlisted soldiers of the realm.

Members create customized squads of characters from their hamlet. The “Test” also provides an excellent place to improve magic skills and test out new spells for mage and priests.
‘Guests’ are supplied a single ‘randomly’ generated squad and are restricted from further role play outside the ‘Soldiers’ Test (ARST). Guests play for ‘FREE’. Members enjoy more options for a minimal monthly fee. They can easily import or export their characters for the Adventurers of Renown Gaming Series.