Adventurers of Renown: Ruins of Able-Wyvern™ 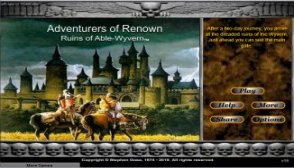 Explore the ancient Ruins of this Dread Castle. The Ruins is the first introductory game module of man-to-Hero combat, and provides characters the best place to begin their first few campaigns before going into the gaming series — Legends of Renowned Deeds™ (LoRD) RPG.