Rulers of Renown: The Emancipation™ 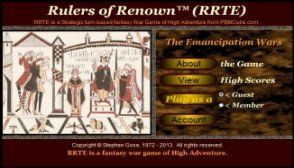 The Emancipation Wars is the first introductory game-module of fantasy strategic warfare. It is turn-based, multi-player Fantasy Role-Playing Game of high adventure and legendary deeds. Build armies, hire mercenaries, search out daemonic hordes, conjure magic spells or send your legendary heroes into forsaken ruins.  ‘The Emancipation Wars’ is the initial gaming module of military conquest and liberation. This game provides your initial Adventurer of Renown characters the best place to earn renown as military leaders of the realm. This game is statistically balanced, and allows your newest characters to grow in status, skill and renown before launching into its sister game The Legends of Renown Deeds™: The Hero’s Quest (LoRD).

Subscribing Members create customized warlord characters, career paths, and choose the character’s race and also enjoy the privilege of multiple character creations (up to 20 active characters!), custom game creations through the scenario editor, and many other benefits.

‘Guests’ are supplied ‘randomly’ generated warlords and a single player position. Guests are restricted in this demo “FREE to Play” version.